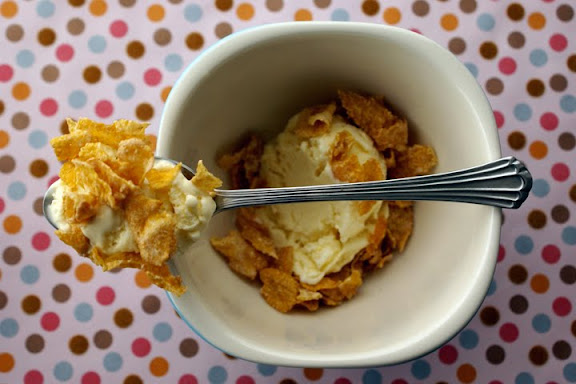 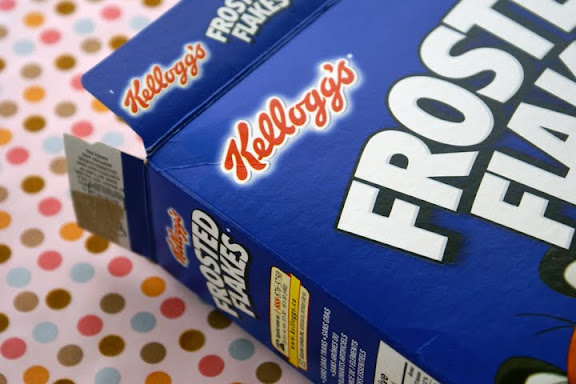 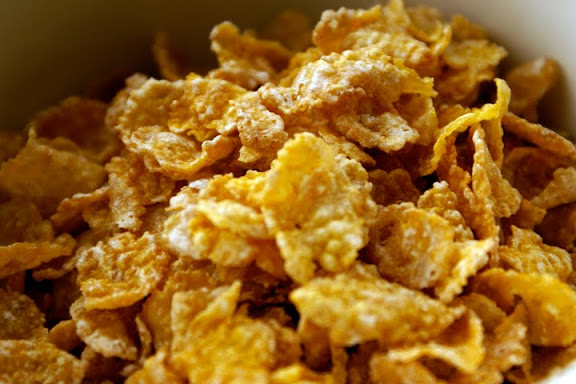 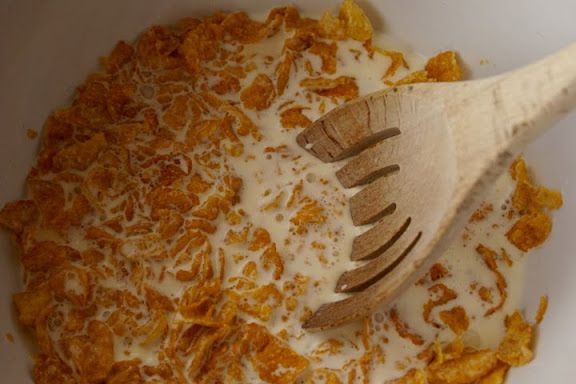 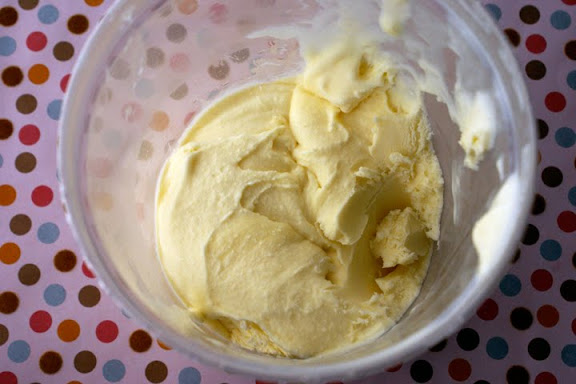 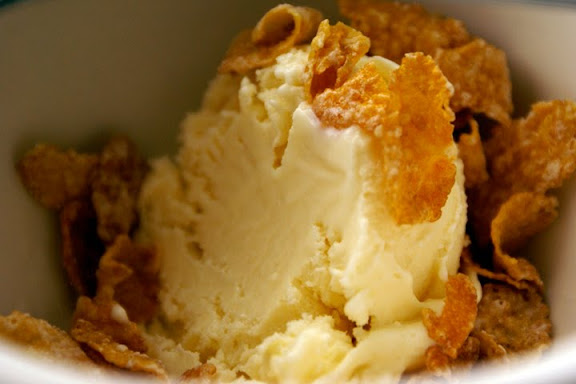 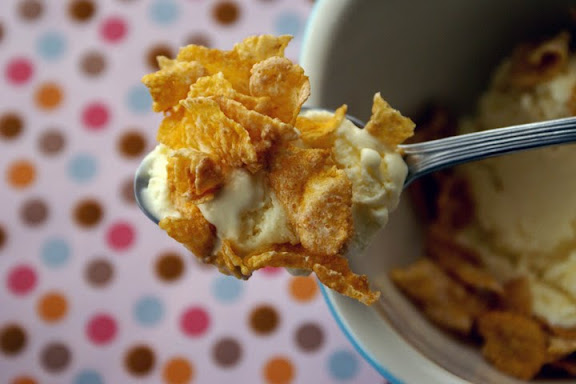 I think the first time I had cornflakes on my ice cream was in Japan in 2002. On that trip, any time I saw green tea “soft cream” (soft serve ice cream) I would get it. And it happened to be everywhere! I knew I would never have it this good for a long, long time (being the soft serve fanatic and a green tea ice cream maniac that I am). So, like, every day I would get a green tea soft cream cone.

In Japan I also had my first Asian-y sundae. The light and corny crunch of corn flakes or frosted flakes on ice cream is unbeatable. Add some mochi, some sweet red bean and you have an Asian sundae straight from the doors of Ice Cream Heaven.

Speaking of travel: It’s been four years since my last visit to New York and I am dying to go back, to eat my way through the streets and to try all the places I’ve been reading about over the last few years… Momofuku for one! Momofuku Milk Bar has the best-sounding crazy person menu, and one of their feature items is their trademarked Cereal Milk ice cream! Yes!! I love cereal so hard–I can’t even buy cereal because I will vaporize it in like two days. That’s how much I love cereal.

Cereal milk ice cream, eh? I have fond memories of eating cereal as a kid. When we were kids, we rarely got the special cereals, ie the ones with loads of sugar. When we would go down to Seattle on special occasions, we could get to bring back the crazy “American” cereals– Count Chocula, Fruity Pebbles, Cinnamon Toast Crunch… but in Burnaby, BC, it was Red River cereal on the stovetop for us! And sometimes Honey Nut Corn Flakes, or “Just Right.” But the sugary ones were the ones to turn your milk pink, or chocolatey, leaving their sugar behind ready to be spooned up or drunk back with a tip of the bowl.

So back to the ice cream recipe. A few googles later, I found this blog and her take on the Momofuku cereal milk ice cream. A few modifications later and here it is, with the addition of Frosted Flakes sprinkled on top, it’s a perfect little crunchy and creamy sundae.

1. In a medium bowl, combine cream and milk with Frosted Flakes. Refrigerate for up to 30 minutes.

2. Strain cereal out and discard. Put mixture in saucepan with sugar (to taste) and bring to a simmer on Medium Low heat. Meanwhile, whisk egg yolks in another bowl.

3. Once sugar is melted into milk, remove from heat. Slowly whisk milk mixture into egg yolk mixture until combined. Be careful not to scramble your egg yolks with this step!

4. Place saucepan back on burner on medium-high heat, add mixture. Continuously stir until the mixture thickens and coats the back of a spoon. Watch carefully!

5. Remove from heat, pour into bowl, cover with plastic wrap so the wrap touches the surface of the mix so no milky skin thing forms, and place in freezer for 2 hours, or refrigerate overnight. Mix must be cold before hitting the ice cream maker.

6. Place in ice cream maker and make according to machine’s instructions. I mixed for about 22 minutes, it seemed about right… !

You can now eat this deliciousness right away or pack it into an airtight container, such as a yogurt container, to harden up. When you want to eat it, place on counter for 5-10 minutes to soften it up before scooping.

Scoop into a cute bowl, sprinkle generously with more Frosted Flakes, and enjoy a TRUE DELIGHT!!!

’til next time Ice Cream Land,