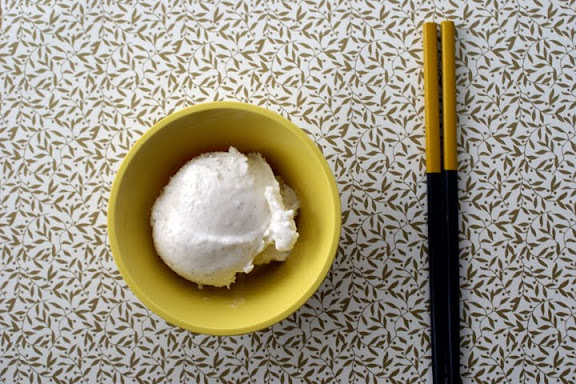 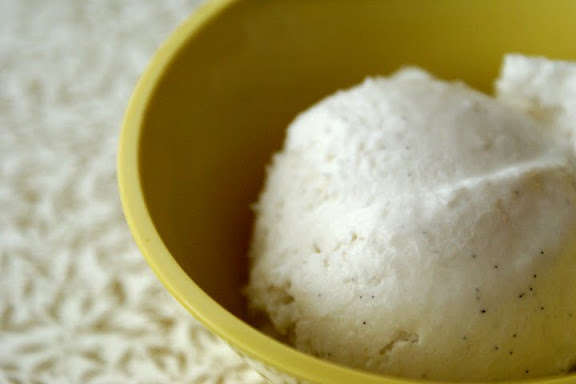 The cool thing (heh) about this ice cream: easy breezy to make. Like a cool breeze on a hot day. Except, if you accidentally leave the mixture in the freezer for three hours when you only meant to chill it briefly. This is what happened to my vanilla bean coconut ice cream–so I mashed it all up with forks into a slushy mixture and I still tried to put it in my ice cream machine in vain. My poor Silver Ice Cream Machine chugged along, pretty much screaming in overloaded pain, so I had to quit. The mix had already formed ice crystals, and never recovered… but of course I’m still eating it anyway.

But since I’ve made this recipe before, I can tell you this is a creamy and delightful ice cream for the coconut megafan, fragrant too from the vanilla bean. So I’m sharing it anyway even though this particular batch did not work out for me because I forgot about my chilling mixture! This recipe is also great for vegans or those allergic to dairy, as it is completely dairy-free! It’s quite rich and is nice served with fruit, as the acidity of the fruit is a nice contrast to the creamy richness of the coconut cream.

1 can of nice quality coconut milk (it’s best not to cheap out on coconut milk. Usually, unless it’s on sale, the costlier the can, the more fat it will have in it, thus a creamier coconut milk and creamier ice cream).
2 cans of nice quality coconut cream
1/2 cup white granulated sugar (I like my ice creams less sweet- most recipes call for at least 3/4 cup, so use your own discretion!)
1 vanilla bean, split
1 teaspoon pure vanilla extract
pinch of salt

2. In medium bowl, whisk all of the coconut cream together until combined. (Sometimes coconut cream and coconut milk separates in its cans but just whisk back together and no prob.)

4. Chill mixture, wrapped with plastic wrap, in freezer for 30 minutes, or in fridge for 2-3 hours until well chilled.

5. Pour cold mixture into ice cream machine, and make according to machine’s instructions!

No need to serve with chopsticks… 🙂